Line SS17-107 on the diagram on the right contains a seismic interval, with discontinuous and contorted reflections, interpreted as a giant carbonate debris reservoir play (Exotica Formation: pink layer). This rock layer has been structurally deformed into an anticlinal structure with 4-way closure immediately below the Mussel Cliff oil seep.

Hydrocarbon generation models and pyrobitumen-bearing sediments recovered from the seep location indicate that the Exotica Formation received an oil charge from the Pliocene to Recent time.

Deeply buried carbonate platforms and their adjacent slope deposits are a focus of petroleum exploration around the world because of their reservoir qualities, with 50-60 per cent of global hydrocarbon production flowing from these rock types.

During the Miocene (12-22 million years ago), the island of New Ireland was a continuous chain of coral reefs that extended for over 300 kilometres. Although the volcanic island that the reefs were built upon was constantly sinking due to basinal subsidence, the reefs happily kept growing until they built up a thickness of up to 1,000 metres (Lelet Limestone). In total, the chain of reefs formed an elongate carbonate platform.

But the New Ireland reefal sediments did not get buried in a conventional way, because around 12 million years ago, they were tectonically uplifted to form a mountain range over 2,000 metres above sea level.

The over-steepened carbonate slopes were prone to collapse failure during earthquakes. The modern New Ireland coastline shows evidence for multiple slope failure events, where large blocks of the uplifted carbonate platform collapsed into the ocean. The collapse events delivered massive volumes of carbonate rock debris into the offshore deepwater areas.

PEAK discovered multiple debris flow units in the New Ireland Basin during a 2017 2D seismic campaign, with the largest being the Exotica carbonate debrite, measuring 45 kilometres in length, 32 kilometres in width and with thickness up to 400 metres. 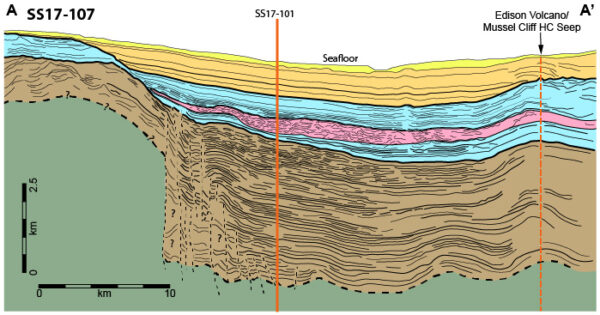